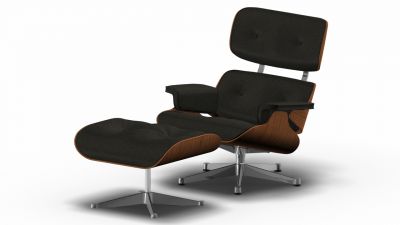 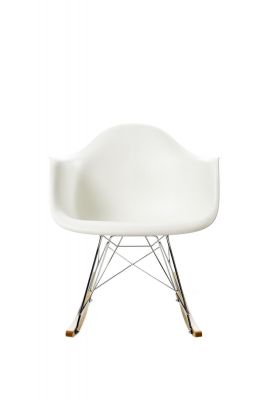 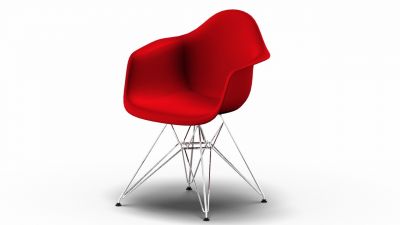 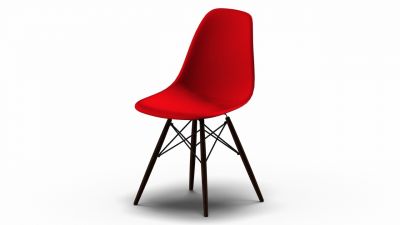 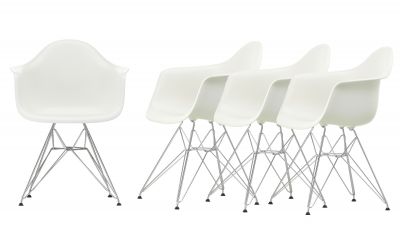 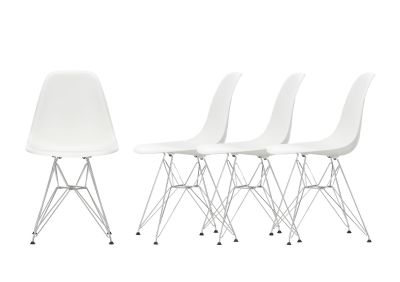 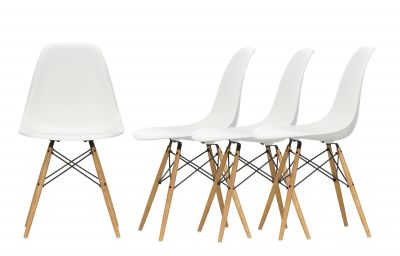 Two names that are indispensable in the design world

If you love design, enjoy browsing interior design blogs and can spend whole afternoons in furniture department stores, the name Eames will not be entirely unknown to you. Many people will probably immediately recall their most famous works of art, the Eames Lounge Chair or the Eames Plastic Chair. The Eames family, however, sees for much more than just world-famous furniture products and fascinates in many facets. We have compiled a brief overview for you here.

Probably by far the most influential American architect and designer of the 20th century, he was born on June 17, 1907 in St. Louis, Missouri. In what was then a rapidly growing small town, Charles decided to further deepen his passion and enrolled in the architecture program at Washington University in St. Louis. 1930 - the 23rd year of Charles' life was already connected with many events: His marriage to his first wife Catherine Woermann had just lasted a year when his daughter Lucia Dewey Eames was born. With the nutrition of the newly born family in mind, Charles opened his first architectural office in the same year. But even the acceptance of every commission did not bring the family out of their critical financial situation. Gloria Koenig writes in her work on Eames that this situation even led him to the decision to travel to Mexico in 1933 with less than one dollar in cash. He sent his wife and his daughter Lucia, who was three years old at the time, to Catherine's parents. The culture and colors of the explored Mexico, where he exchanged paintings for food, influenced Charles so much that these experiences were to influence his later works.
After some time, Charles was finally awarded a scholarship to the Cranbrook Academy of Work in 1938, which was to change his entire future life. Not only was this scholarship continued in the following year to a teaching position for design. In 1940 he also won the "Organic Design in Home Furnishings" competition with Eero Saarinnen, which was awarded by the Museum of Modern Art in New York. The University of St. Louis was so convinced of Charles Eames' work that he was appointed head of the industrial design department of the Cranbrook Academy of Art in the year he received the award.
Charles' career was going well, but his marriage was going through increasing difficulties. How and whether this was already connected with his future wife Ray Kaiser, who attended the Cranbrook Academy of Art in 1940, will probably remain a mystery. From the initial phase of the love story between Charles and Ray, only the marriage proposal and the year of the marriage, 1941, is known. In the same year his marriage with Chaterine had failed. Charles asked for her hand in a letter to Ray, in which he not only confessed his sincere love for her, but also asked her directly about her ring size.
Together with Ray, Charles began an unprecedented career, creating numerous pieces of furniture that are still at the forefront of the design world today. A summary of their joint professional career can be found in the chapter The career of Ray and Charles Eames.

That Ray (née Bernice Alexandra Kaiser, 1912 in Sacramento, California) has a special talent was already apparent at the age of 3 when her extraordinary talent for drawing was discovered. Remaining true to her values, her life path led her via the May Friend Bennet School in Millbrook (New York) to Manhattan, where she studied painting until 1939 under Hans Hofmann, an important German-American painter, teacher and art professor. With the intention of settling in California, Ray Kaiser made a stopover at the Cranbrook Academy of Art in 1940 to study design for four months. A stopover that changed her life: during her work with Eero Saarinnen and the preparation of the diagrams for the "Organic Design in Home Furnishing" competition - organized by the Museum of Modern Art - she met Charles Eames.
The marriage of the two in 1941 not only united two loving people, but also heralded a perfectly functioning collaboration in the design world. Ray - largely unnoticed by the public - acted as the creative part alongside a technically active Charles Eames. In 1988 Ray Eames died at the age of 76, 10 years after her husband Charles.

A sustained high flight - the career of Ray and Charles Eames

As their first joint projects, Ray and Charles worked from 1941 to 1943 on designs for aircraft parts, stretchers and leg splints made of deformed plywood for the military on behalf of the U.S. government.
It was already clear during this time that Eames paid great attention to his designs - taking a lot of time for details and always striving to reduce them to the essential. Charles Eames once shared this view with the words "Those needs and designs that have a rather universal quality will tend to last".

The first chair in serial production

Charles Eames' first significant successes were not long in coming: the designs of the so-called "Organic Chair" achieved their first award-winning results in the "Organic Design in Home Furnishings" competition. The fact that the chair did not make it into mass production, however, was due to the difficult manufacturing process in terms of technical feasibility at the time. Vitra now offers the Vitra Organic Chair, which with its uniquely shaped seat is based on the 1940 design. Back in 1940, production in larger quantities was only possible with the Plywood Group. The seat and back were separated from each other and separate plywood shells were used. The production of the Plywood Group, which Vitra began in the late 1950s, included a chair, a formally identical but somewhat lower armchair and several coffee tables.

Subsequently, the couple increasingly experimented with the use of fiberglass as a material. Fiberglass was the optimal material not only because of its comparatively low price, but also because of its material properties: expensive metal could be dispensed with, while the possibilities for shaping were just as unlimited. The liquid plastic was simply brought into the favored form using suitable presses. The result was the first one-piece bucket seat. Today the Vitra DSR and the Vitra DAR are particularly well known as descendants of these chairs. In order to protect the environment, Vitra switched to the more compatible, recyclable polypropylene as a replacement for fiberglass or synthetic resin in today's production.

The Lounge Chair is probably the most highly regarded masterpiece of the Eames to this day. In 1956 Ray and Charles presented the Lounge Chair, which, in accordance with their duty of care, involved several years of development work. Originally intended as a birthday present for director Billy Wilder, Ray and Charles Eames developed a modern interpretation of the club chair in the highest quality:
Both the ottoman, which comes with the Lounge Chair, and the Lounge Chair itself feature laminated wood shells mounted on a movable and rotating steel base.
Optimum comfort is provided by the connection of the upper laminated wood shell with the middle one via a rubber-mounted metal support - thus the suspension of the armchair is even better.
A design that Vitra not only brings to the living and working rooms of particularly conscious furnishings, but has also become part of many permanent exhibitions, for example that of the Museum of Modern Art in New York or the National Gallery of Victoria in Melbourne.
After the success of the Lounge Chair, Charles and Ray again devoted themselves to experiments with different materials. After their aluminium chair series (EA 101 or EA 104, among others), they won the contract to furnish the lobby of the Rockefeller Center in New York. During this time, the Eames set a new standard in American design with their chairs, which is still the epitome today.

The vision of the Eames

The Eames couple perfectly combines architecture and design. Although it has already been mentioned that mostly only Charles is mentioned in the media, his wife Ray had a very big influence on some of the most famous designs. Following in the footsteps of organic structures, they were influenced by artists such as Paul Klee, Joan Miró or Alexander Calder and displayed a graceful aesthetic with their furniture pieces, which is still very popular today due to its unobtrusive design.
The couple were always so engrossed in their own work that it sometimes literally captivated them. In dealing with them, one quickly realized how much they lived the design. For example, they often tried to appear in the product photos: a spectacle in which Charles and Ray Eames were not only seen to be having tremendous fun at work, but also to introduce people to modern design, promote its acceptance and take away uncertainties about the new pieces of furniture. This is how, for example, an extremely well-known photo of Ray and Charles Eames was created, showing both of them under frames from the Plywood Group - better known as the "entomology photo".

The collaboration with Vitra

What began for Vitra founder Willi Fehlbaum with his first visit to the USA in 1953 was to end in a highly profitable cooperation: During a cab ride, the Vitra founder was so thrilled by a chair placed in the window of a store counter that he immediately asked the driver to stop. The chair, which until then had been under the license of the producer Hermann Miller, was to go to Europe. In 1957, in an interview with the manufacturer, he finally obtained the transfer of production rights in 1957. This license related in the first instance to the exclusive production of the designer furniture of Charles and Ray Eames, but was extended in 1984 to include further rights for the entire Eames product range. Nothing more stood in the way of distribution in Europe and the Middle East. The working relationship between Willi, his wife Erika Fehlbaum and the Eames turned out to be so pleasant that the Eames became good friends of the family and also had a lasting influence on Vitra's vision through their attitude. Thus Vitra still follows the example of Charles Eames.

Not only in America have the Eames inspired. Also in Germany - thanks to the efforts of Willi Fehlbaum - their furnishings can be found in the Reichstag, the Federal Chancellery and many living rooms. In addition, the company around founder Willi Fehlbaum deserves a great honor, especially because of the preservation of the Eames work - because material studies, tools and photographs of the Eames are safely stored in the archives of the Vitra Design Museum.
The House of the Eames, better known as Case Study No. 8, has also been preserved. It follows the idea of an initiative launched by the magazine "Arts & Architecture" in 1945 to show people a new way of living in the post-war period. Today, the house for which Ray and Charles Eames had given up everything at the time of construction is still owned by the family.